UPDATEWe have now confirmed via X-ray that Ivy will have 8+ puppies the first week of October.

She and the father, Maxx are very excited. And so are we.

Both sire and dam come from Mystical Shilohs in Canada and we expect a rainbow of plush coats.

We will provide updates as they become available.

THE PUPPIES ARE HERE!!

The pups came a day early, October 5, 2015. There are two males and eight females.

The males are Dark Grey Sable and Black and Cream

We will post photos weekly so you can monitor their progress. Many of them are spoken for. There are still a few that need a forever home so if your are interested, contact us.

Sadly we lost one of the females. She was not thriving and we had her examined by the vet who confirmed that she had a clef pallet and could not survive. Even though she was only with us a short time the loss is very upsetting because as we have said before these dogs get into your heart on first contact and it never goes away.

On a brighter note the other nine and Mom are doing great. More news later.

Week 1 puppies are posted on their own page. All are thriving and have at least doubled their birth weight. ENJOY!!

Week 2 puppy pictures are posted on the Week 2 page. They are all growing very fast. All eyes are open and the ears are starting to move. They think they can walk but are pretty wobbly. (We call them the weeble people). They are either sleeping, eating or trying to run around the whelping box. Between the attempts at barking, howling and cooing, the noises are precious. We are trying a new gallery program for the pictures. The names appear when the cursor is placed over the photo. If you click on the photo you can see an enlarged version. We hope this helps you enjoy the photos.

The puppies are really changing. They all have their eyes open and teeth are starting to show. They sit by themselves and are starting to wrestle with their siblings. They are very active and good photos are hard to come by. The week 3 photos are posted on the Week 3 page. They also had their first encounter with a bowl of goats milk tonight. Some fun with a little milk everywhere.

the gang just hangin’ around

Puppies are growing fast. They are out of the whelping box and into the puppy room. They are eating out of the dish more and more. They are wrestling with each other and trying to run. It looks more like a bunny hop. They bark and growl at each other and play with toys. Our time with them is moving much to fast as we are sure their time to their forever homes is moving much to slowly. !!

Enjoy the Week 4 pictures. We are sure you will see some changes. 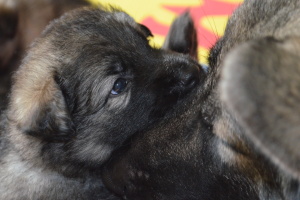 The pups have out grown nursing but have not outgrown the need for contact and guidance from Mom. Ivy spends her time gently teaching them how to play without being to rough. They play bow and wrestle all the time they are awake and not eating. Most also have learned what the litter box is for. Their weighs continue to increase and their personalities are starting to develop. As busy as they keep us we know it is going to hard to let them go.

What a week this has been. The pups have had their first taste of fresh air and exercise. We turned our front porch into a giant play pen, 42’X8′ and let them run and play. It was really something to see. They ran until they couldn’t run anymore and then fell asleep. Mr. Yellow tried out as Santa’s Helper but fell asleep during the dress rehearsal. The changes this week have been unbelievable. What characters we have in our house. The photos this week have convinced us that maybe week 7 photos will be of puppies sleeping! Time will tell. Enjoy. 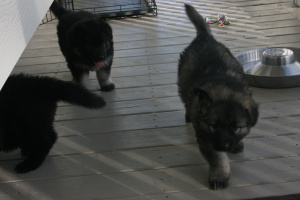 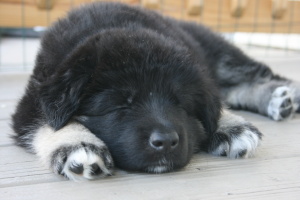 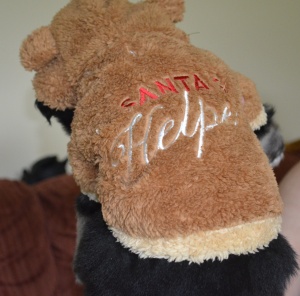 Week 7!! Boy has time flown by. These little one have grown so much they are hardly little. As we look at them it’s hard to believe that we have held these pups ever since they took their first breath. This is going to be a busy week. We have Temperament testing and vet checks to get through. Then we can help them find the best home possible for their personalities. Then it will be time for that moment we have been dreading. They will leave our home. We hope to keep up with them through pictures and stories from their new homes. If we have done our job, they will be happy and healthy in their new home for many years.

Enjoy the Week 7 pictures. They have grown!